Two years following the discovery of gold at Mount Alexander, the first Castlemaine Hospital was opened in Gingell Street on May 24, 1853.

The Hospital provided essential medical and nursing care and, in 1939, was relocated to new buildings in Halford Street where it remained in service until December 22, 1995.

Following a severe winter and widespread suffering in the community, extensive fundraising enabled the establishment of the Castlemaine Benevolent Asylum which began operation in Cornish Street on July 4, 1860. The Asylum gave refuge to those in need of food, shelter and clothing. It changed focus to the care of the frail, aged and disabled following the turn of the century and was later renamed ‘Alexander’. 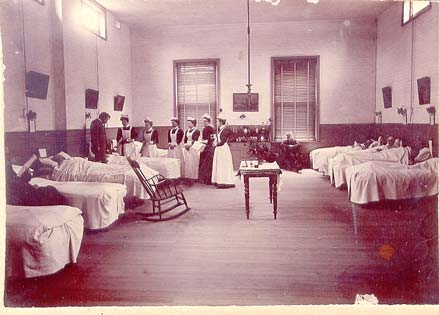 The Mount Alexander Hostels commenced operation on the site of ‘Alexander’ between 1959 and 1962 to provide alternative accommodation for the elderly and frail.

On July 1, 1986, the Castlemaine & District Community Hospital and ‘Alexander’ amalgamated to become Mt. Alexander Hospital. A major building program commenced in 1994 and all facilities and services were consolidated on the Cornish Street site on December 22, 1995.